Political party leader Paul Weston was arrested by police and faces up to two years in jail for criticizing the religion of Islam during a public speech in the United Kingdom.Weston’s “racially aggravated” hate crime consisted of him quoting Winston Churchill.Weston’s arrest reveals the chilling implementation of thought crime in Britain and how political correctness is being used as a weapon with which to destroy the edifice of freedom of speech across the western world.

Designed to shut down speech and eliminate political opposition 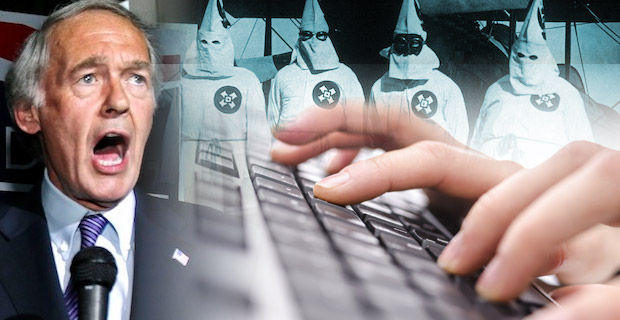 Sen. Markey and the Democrats want you to believe there are evil KKK racists out there blogging and they threaten the social order.

Earlier this month, we ran a story on Senator Ed Markey’s The Hate Crime Reporting Act of 2014. The legislation proposes updating a twenty year old report on the role the internet, radio and TV allegedly play “in encouraging hate crimes based on gender, race, religion, ethnicity, or sexual orientation.” The report would then be submitted to respective committees in the House and Senate for action.

Mac Slavo, writing for SHTFplan.com, extrapolates how the government might go about collecting “hate speech” on the internet to be included in the report and then submitted to Congress for action.

“As we noted previously, there are already pre-crime systems actively monitoring the internet looking for discussions and behaviors that can be used to identify potential criminals before any crime occurs,” Slavo writes. “Combined with new Web Bot hate speech tools, could the government then preempt detentions and arrests under the Patriot Act or National Defense Authorization Act, both of which allow for action to be taken against those who threaten national security, yet another broadly define term?”

Roundups à la Nazi Germany are, at this stage, probably not part of the agenda, but one can easily imagine zealous Democrats and “progressives,” forever striving to broaden the horizon of unacceptable behavior (on the part of their ideological enemies), and thus using this law, if enacted, to ferret out the likes of Harry Reid’s “domestic terrorists” and shutting down their websites.

Due to the fact the Ku Klux Klan is virtually nonexistent (and was, in the 1960s, part of the government’s COINTELPRO) and white supremacists like Hal Turner work for the FBI, this law would have little applicable purpose beyond eliminating all who stand in the way of a socialist utopia where all animals are equal, but some animals are more equal than others (based on skin pigmentation, gender and sexual orientation).

For the political elite, the internet is a dangerous quagmire where thoughts run free and truth is allowed to exist without interpretation by the establishment intelligentsia. Increasingly, the proles are turning away from the control channels of the corporate propaganda media and are seeking out information and formulating their own opinions. More and more citizens, according to Markey and the Democrats and no shortage of establishment Republicans, are falling victim to “hate speech,” i.e., speech in opposition to the government and the establishment.

This is the real nature of The Hate Crime Reporting Act of 2014. It is not designed to prevent crimes by racists and homophobes. It is designed to shut down speech. It is designed to eliminate the political opposition. The establishment does not care about the murder of gays or lynchings of blacks, as infrequent as such events are in today’s world. The political establishment, be it controlled by Mao, Stalin, or Obama, is primarily and exclusively interested in safeguarding and maintaining its monopoly on political power. Imposing a “hate speech” criteria is merely another way for the establishment to make sure there is no challenge to its hegemonic power.