Ted Cruz just got slaughtered at the polls after declaring his support for Monsanto; pro-GMO Republican establishment now in state of total collapse 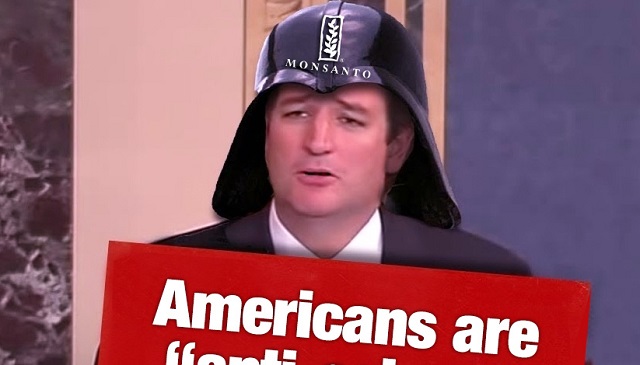 by Mike Adams, the Health Ranger

(NaturalNews) Republican presidential hopeful Ted Cruz suffered nationwide devastating defeats at the polls just one day after denouncing health-conscious Americans as “anti-science zealots” for their opposition to GMOs. In a shameless endorsement of agrichemical giant Monsanto during an Iowa speech, Cruz made it known that he was all-in for the agricultural establishment that poisons America with weed killers and toxic GMOs linked to cancer.
https://www.youtube.com/watch?v=6WpCyOs1eR0
But Ted Cruz didn’t just casually say he supported Monsanto; he went out of his way to parrot Monsanto’s talking points and domineering arrogance, choosing to insult tens of millions of health-conscious Americans by calling them “anti-science zealots” and mocking their legitimate concern over pesticides, herbicides and GMOs in food.

A man who would unwittingly eat a horrific booger on national live television, in other words, doesn’t think Americans should have the right to know what they’re eating, either. Somehow, this is just as grotesque.

Natural News, U.S. Right to Know, the Robert Scott Bell Show and dozens of other independent media outlets ran my story that attacked Cruz, where I accused him of committing spiritual treason against God for siding with Monsanto over the food safety of Americans. I also directly accused Ted Cruz of denying Americans the right of self-defense against chemical violence, stating “In effect, Ted Cruzbelieves that Americans have the right to buy a gun, but not to read a label.”

In less than 24 hours after my article ran, Ted Cruz got absolutely slaughtered at the polls, all but ending his attempt to challenge Donald Trump for the Republican nomination.

Riding an accelerating wave of anti-establishment sentiment from Americans who are fed up with being lied to, poisoned, over-medicated and economically punished by bad government, Donald Trump achieved resounding victories in Florida (yep, Rubio is out!), Illinois and North Carolina, with Missouri results too close to call at the time of this writing.

Ted Cruz didn’t win anywhere, and while he did pick up a few delegates for his partial losses, it has become increasingly clear to everyone that Ted Cruz can’t beat Donald Trump. Nor can he beat Hillary Clinton, for that matter, because his overly preachy demeanor and holier-than-thou attitude is nakedly offensive to nearly everyone except the delusional devout.

Nor is Ted Cruz even a constitutional liberty supporter as he claims to be, or else he would support the right of all Americans to freely choose what food they eat by supporting honest food labeling. There is no freedom to choose if your choices are concealed by a corrupt cabal of Washington sellouts who are little more than legislative prostitutes for corporate interests. Hence my new nickname for Ted Cruz: “Monsatan’s Preacher.”

Related: The Environmental Working Group has just issued a late-hour alert on a sudden Senate vote on the DARK Act, which would outlaw GMO labeling nationwide. Ted Cruz is no doubt set to support this malicious, freedom-destroying attempt by Monsanto to pull the wool over everybody’s eyes and continue its covert poisoning of American consumers. Click here to take action now at EWG.org.

On the Democrat side of things, Hillary Clinton is a complete Monsanto sellout… she actually did legal work for the biotech giant when she worked at a law firm in Arkansas. Bernie Sanders, in contrast, brings a breath of fresh air to the issue by fully supporting GMO labeling laws like the one passed in Vermont, his home state.

Sadly, the Hillary Clinton criminal elections machine has already steamrolled Sanders’ chances, as the DNC obviously pre-decided that Hillary would be the Democrat nominee long before any votes were cast. (The DNC does not believe the choice of their nominee should be left up the their voters, after all… and neither does the GOP for that matter.)

If Sanders had been able to beat Hillary Clinton, he would instantly be the anti-GMO choice for President. Sadly, he appears to have already been mathematically “extinguished” due to the rigged superdelegates controlled by the Clinton camp, which is staffed and run by criminals worthy of being prosecuted for treason.

So where does Donald Trump stand on the issue of GMOs and honest food labeling? We honestly don’t know yet.

There have been clues that Trump supports organics, and he’s definitely an anti-establishment personality. He’s also from New York, which tends to be more progressive on issues of clean food and food transparency. Doctor Oz, for example, runs his show out of New York and has been a remarkable pioneer in teaching the public about food issues.

But until Trump actually says something on the record about Monsanto, we can’t be quite sure where he stands on the issue. There was a tweet that went out a few months ago from his account which implied that Iowans might have made poor choices in their votes due to them being poisoned by genetically modified corn, but Trump retracted that tweet by saying it came from a staffer, not himself. Perhaps he really did tweet it but decided the backlash from Iowa was too great to let it stand.

So as of right now, we remain in limbo on the Trump question when it comes to GMOs and Monsanto.

Ted Cruz a traitor to the American people

What we know for sure is that Ted Cruz is a Monsanto shill and a traitor to all Americans who seek the right to choose safer food. We also know that the GOP establishment that has long supported Monsanto just COLLAPSED with the desperate demise of Marco Rubio (and Jeb Bush before that, thank goodness).

The pro-biotech Republican establishment has just imploded. The masses of America have now turned anti-establishment in record numbers… this is a watershed moment for this nation, as every single attempt by the media, the GOP insiders and all the big money lobbyists to push another Monsanto-controlled Republican puppet into the White House has utterly failed.

Make no mistake that Donald Trump is NOT owned by Monsanto. And my guess is that he’s very likely to support honest food labeling for America.

Be sure to monitor alternative news headlines on Donald Trump and Hillary Clinton at Trump.news and Clinton.news to stay up to date on these candidates and their views on Monsanto, glyphosate and GMO.